Things they never taught me

New Kid posted a while ago about the thrills and challenges of paleography, which is one of the things history majors often neglect to consider when they imagine themselves roaming through the pages of yesteryear gathering up stories. (I recently gave in to the temptation of photocopying a few pages out of the records I’ve been consulting, partly for their utility but mostly to show off to my students – “you think that primary sources are challenging, when you get to read them all transcribed typed and translated into English?! Ha! Take a look at this, sissies!”) There are lots of things they don’t tell you when you start graduate work in history, and one of them is that if you’re lucky enough to figure out a good research idea, and scrounge up funding to go wherever it is your sources are, and figure out all the archival labyrinths to actually get hold of the files you want, there’s a fairly good possibility that they will be torn and stained and scrawled in a hand that is less legible than chicken scratches.

If I were to write a field guide for fledgling historians, I’d include all the practical stuff most of us learn the hard way (and that some of us keep learning, because for some reason I’d forgotten all of this from the last time I did hard archive time.)

· Get in shape. Strengthen those wrist muscles, because there’ll be at least one archive that won’t let you bring your laptop, and you’ll have to copy things out by hand. This may not sound like a big deal, but for me it’s been about ten years since I’ve handwritten anything longer than a grocery list, and leaping into four or five hours of handwriting makes me a little more sympathetic towards my students who write blue-book exams.

· Toughen up those spindly arms, too, because those innocent-sounding council reports you asked for come in a box the size of a Volkswagen, and you’re the one that gets to lug them across the room.

· Dress appropriately. My key mistake today was dressing in black. Sure, if you’re working in Europe you’ll want to look all classy and sophisticated, but some of those files are going to come in teetery two-foot stacks of ratty old paper, and there’s no way to get them safely across the room without leaning backwards, hugging them tightly to your chest, and walking in a slow penguin-shuffle to your desk. If you’re wearing any dark color, you might look good coming in, but you’ll leave papered in dandruffy flecks of archive residue. Solution: invest in a wardrobe whose theme color is four-hundred-year-old-paper beige.

· Last but not least, if I’d known better when I was a kid, I’d have taken some sort of Scout training to learn how to tie knots. In one archive, the only thing holding those teetery two-foot stacks of paper together is a thin cloth ribbon, wound in an impossibly intricate cat’s-cradle around the bundle. Sure, it’s easy enough to undo, but when it’s time to tie them up again, it’s like some sort of sadistic puzzle where you always come up an inch short. I used to think that the practice of history was about finding Clever Answers to Meaningful Questions; now I know that it really all depends on getting the damn knots right.

Posted by Pilgrim/Heretic at 2:02 PM No comments:

A couple of weeks ago Mr. P/H and his sister and I rented a car and headed south for a tour of sunny Andalucía (from whence the most colorful postcards came). And that has given me the perfect excuse to try out this new Blogger image doohicky.

I'm not kidding about the colors - the sky really is this blue. 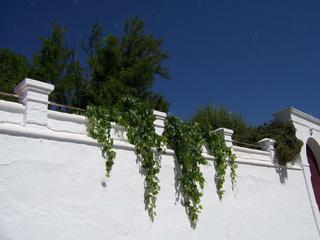 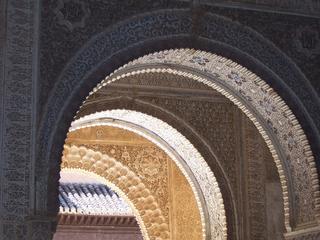 On the right is the interior of the Alhambra, the last Moorish palace in Spain.

Below, looking up at one of the columns in the cathedral of Granada. 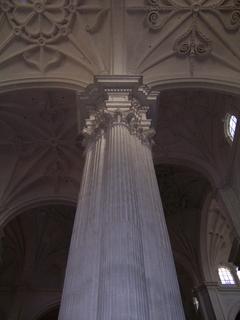 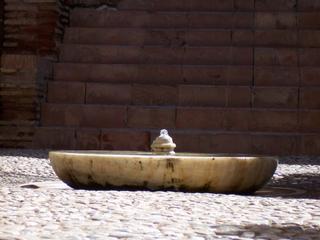 One of the many fountains of the Alhambra. The whole palace (from the 13th century) and its gardens are designed around water, with a series of fountains and channels that provide the soothing sound and the cool refreshment of splashing water in each terrace and patio of the palace. 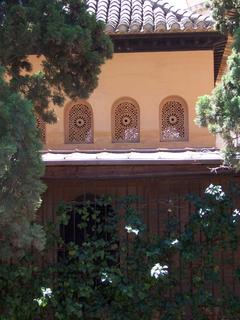 And to the left, one of the patios. The gardens of the Alhambra are about the most peaceful place I've ever been.

Notice the carving of the windows, designed to let in breezes and gentle patterns of light, but shielding the interior from the intensity of the sun.

The same idea is applied to the public baths that existed in every Muslim city, where star-shaped openings in the ceiling serve to illuminate and to let the steam escape. These folks knew how to elevate bathing to an art form. 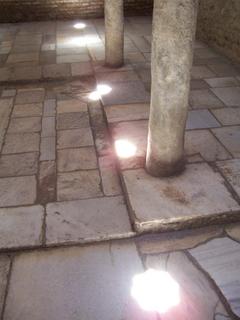 Posted by Pilgrim/Heretic at 5:30 AM No comments:

A scene absolutely typical of Spain: we stopped in a bar the other day for a cup of coffee (bars in Spain being the sorts of places where one gets not only alcoholic drinks but good espresso, snacks, and fresh-squeezed orange juice). In some places a waiter will come take your order, but in most you need to go ask at the bar, especially if you’re only ordering drinks. We sat at a table and waited a few minutes, but as the waitress was busy with other tables in the back, and particularly since the coffee machine was behind the bar, Mr. P/H went to the bartender.

Mr. P/H: Hi, could we have two coffees please?

Bartender: No, no, wait, the waitress will come take your order.

He returns. We sit; we wait. Waitress ignores us.

After a while, Mr. P/H returns to the bar: Could we just have two coffees?

Bartender: No, no, wait, the waitress will take your order. [Yells at the waitress: Carmen! Table three!]

Waitress approaches: Oh, I’m so sorry, I didn’t see you. What would you like?

Bartender, satisfied, goes to the espresso machine and makes us coffee.
Posted by Pilgrim/Heretic at 12:15 PM No comments:

I keep thinking I should apologize for not posting much lately, but that sounds awfully pretentious, as though you were all waiting breathlessly for my next words of wisdom. I doubt that’s the case, but anyhow, I’ve missed being able to write more. My little head’s packed full of ideas, but I’ve had less computer access lately, so most of my posts never make it outside my brain.

But here’s one thing I’ve been pondering. One of my principal goals this summer was to set up a new research project, since the last one is in the final stages of being wrapped up. Of course over the past few years I’ve had nice pat answers prepared for the annual-report kinds of questions about my future research plans, but they were designed more to satisfy the report-people than to satisfy me. Lots of ideas, yeah, give me tenure, yada yada. Here, I’ve finally addressed the issue for real, and have tinkered with several ideas to see if they were feasible. About two weeks ago (June 22 to be exact), I had one of those rare mental lightning-bolt experiences where I knew exactly what the next book would be – not just a flicker of an idea but the concept for a full-fledged many-chaptered book, that sprang fully formed out of a tangent of a tangent of one of those earlier ideas.

What’s odd is that even though I find this idea enormously exciting and promising, and I jotted down in my research journal the exact moment of the lightning bolt to remember it fondly in the future, I’ve been reluctant to tell anyone. After a few days I hesitantly mentioned it to Mr. P/H, who was characteristically enthusiastic and supportive, and who had several suggestions about friends & researchers I should talk to. Eeeek! I’m not ready to talk to anyone. But why not? It feels risky enough to say it out loud to my husband; I can’t imagine turning it loose around anyone else.

In part, I’m afraid to get too invested in this idea until I have a better sense of whether it will really work out. The topic is very indirectly related to other things I’ve been working on, and although I haven’t ever come across anything written on this subject, it’s entirely possible that it’s already been done. (This brings back vivid memories of my undergraduate honors project, where I came up with the world’s greatest idea, thought it all through, and went to present it to my adviser, who said “In fact it is a great idea! But it’s just been done,” and handed me a book that was exactly the idea I’d hoped to pursue, written by none other than the best historian in the field and published only months earlier.) But I’ve been scouting for a couple of weeks now, and it really does seem doable, and it really does seem original. So why do I literally flinch at the thought of talking about it? Somehow the idea seems too young and fragile to survive on its own outside of my head; I don’t want to risk it getting banged up or misunderstood or laughed at.

But it’s an idea, not a helpless baby bird, and ideas thrive on company and light and conversation. I get my best ideas, without fail, when I’m kicking topics around with other people. Isn’t that what conferences are supposed to be about? (I know many of you have dark views of the value of the academic conference, but I’ve always found them richly useful for that very exchange of thoughts and perspectives.) What’s most likely is that I’m simply afraid that this topic isn’t half as clever as I think it is, and I can maintain all my fantasies about it as long as no one has the chance to poke holes in it. This of course is an entirely counterproductive attitude; if it does have holes, the sooner I figure them out, the better. The last thing I need is to obsess in great secrecy over this idea, only to have someone point out three years down the road its obvious flaws. And if it does turn out to be half as clever as I think it is, there’s the advantage of staking a claim to it early on, so that everyone knows it’s mine.

What do you all do with new ideas? Do you wave them around on banners, or guard them close to your chest?
Posted by Pilgrim/Heretic at 2:22 PM No comments: