Okay, time to get that previous post out of my head and off the top of the blog. Songbird requested pictures of things in flower, and that's a much nicer image to focus on. I'm not a great photographer of flowers at all, but it's been a wet spring here and things are wildly in bloom everywhere, so here are a few humble examples. 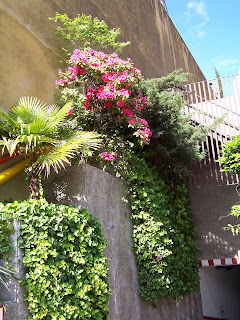 Charming Town has a little fruit and flower market in the main plaza on Thursday mornings. (Is that cheating, to take pictures of captive flowers rather than wild ones? Anyway, I love seeing so many colors piled together.) 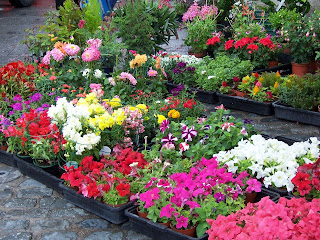 And, nothing is more symbolic of springtime in Spain than the poppies in bloom; they're everywhere, along roadsides, in people's back yards, all the fields are full of them. 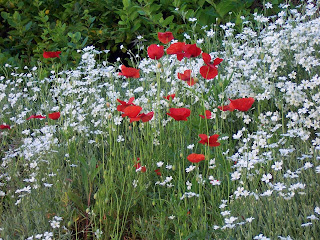 Posted by Pilgrim/Heretic at 2:05 AM No comments:

A little freaked out

Warning: this one's a bit disturbing. It feels weird even to write about, but it's occupying a little too much of my brain for the moment, so perhaps this will help get it out.

In honor of our ninth anniversary, the LWI and I took a few days to head out of the city and visit a lovely town a few hours from here, full of medieval churches and amazing landscapes. It was one of the best trips we've ever taken together, and I'll write about it soon (with pictures for Dale and Phantom and Songbird!) but at the moment all the good stuff has been rudely shoved out of my brain by the events of the last day.

The morning we left Charming Town, we'd arrived rather early at the train station, and were sitting on the deserted platform waiting for the next train to arrive. Finally we noticed that it was approaching, but it seemed to have stopped about 200 feet away from the station, and we could sort of see something on the tracks. We saw the conductor step down; he looked at the tracks, went back into the train, and then behind us we heard the station manager's phone ring. Definitely something odd going on. We thought, surely it's not a person who's fallen on the tracks or something? or an animal? Not an animal; the bit I could see looked like fabric or plastic. And certainly not a person; no one was screaming or running around as they would have done if a person had been hit by a train. Besides, since the train was just coming into the station, it wasn't going more than a few miles an hour, and there was no reason for anyone to try to cross the tracks at that particular point, only a wall on the other side.

We waited for a bit and then I decided to wander down the platform for a better look; more than anything it looked as though there was some construction material from the nearby highway, or a chunk of old tire, or something of that sort that maybe some prankster had thrown on the tracks.

And really, I wish I hadn't done that, because as I got closer the vague sort of lump came into clearer view, and then it waved its arm, and goddamnit it was a person halfway under the train. He was... well, you really don't want to know how he was, but suffice it to say that it took the emergency crews an hour to separate him from the train. (There never was any screaming or running around; the station authorities and emergency guys were brisk but silent, except for the wail of the ambulance when it pulled up to the station. I guess that's logical, and my own reaction was to be quiet and stunned, but the whole scene was very eerie and surreal.)

Astonishingly, they got him out alive, though I saw on the news later that he died shortly after arriving at the hospital. And now there are images in my head that I really really really wish were not there. Questions, too... he turned out to be an ordinary middle-aged bookstore owner, and no one has any idea why he stepped directly in front of a slow-moving train at 10 am on a sunny Saturday morning. For his sake, and mine, and everyone else's in Charming Town, I really wish that he hadn't.

Posted by Pilgrim/Heretic at 4:21 PM No comments: