Woo hoo - New Kid tagged me for a meme! I've seen several folks do this (PPB's is lovely, as are the ones in the comments). I have the feeling this will stick in my head and I'll come up with more over the next few weeks; it's a fun idea.

Anyway, here's how it goes:

1. Write your own six-word memoir
2. Post it on your blog and include a visual illustration if you’d like
3. Link to the person that tagged you in your post and to this original post if possible so we can track it as it travels across the blogosphere (I've lost track of the original post!)
4. Tag five more blogs with links.

Observing in amused silence since 1968. 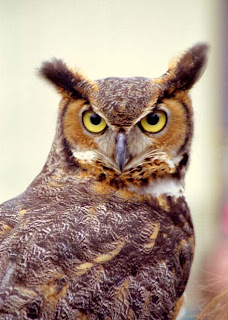 Many of the folks I'd tag have already been tagged, and I'm not even sure who's reading around here anymore. But I'd love to see jo(e), timna, Songbird, Lisa V, and Zhoen give this one a try.
Posted by Pilgrim/Heretic at 6:26 PM No comments:

So I'm making the local arrangements for a conference that will be held here this spring, and although I'm trying hard to not let my ego get wrapped up in it too much, you know how it is with these things - if it goes well and people have a great time, I'll look good, and whatever goes wrong, I'll feel guilty, even if most of the things that can go well or badly are entirely beyond my control.

I sent out a batch of form emails a couple of months ago, informing the participants that their papers had been accepted and letting them know their place in the program. The next morning, I opened my inbox, and there were probably twenty emails in response. I felt my heart seize up, assuming I'd made some mistake in the program, or everybody had complaints and wanted to change times, or something, God knows what, but it looked like a mess.

Trembling, I opened the first email, and instead of blistering criticism, it turned out to be a bright and cheery "Thanks! This looks great!" The second one said the same thing, with an added "Looking forward to meeting you." So did the third, and the fourth, and all twenty of the damn things were just perfectly nice messages of thanks. It made my week.

Now the registration forms are coming in, and it's the same thing. Probably half of the forms have nice little notes added to them, and I can't tell you how gratifying this is to see. (I often add little notes like this myself, assuming they never really got noticed, but now I know that they do.)

It's hard to shake the worries, though. One of the registration forms came from my adviser, who is a singularly intimidating person, even though we get along very well. The first part of the form lists the registration fee and the events it includes, and in the margin she'd penciled in a little "Wow!" Of course I had to panic over that for a few minutes - what did she mean, wow? One would like to think it meant wow, this is great. But what if it meant wow, that's really pricey? Or wow, I can't believe you think you're going to put together that many events on this skimpy registration fee. Did I miscalculate the budget? Is this whole thing doomed?

Okay, then I got hold of myself. Once I calmed down, I saw the bottom half of the form, where she'd written an additional note - "You do us proud." Well, damn, that about made me cry. It really is dangerous to get too much of myself wrapped up in this conference, because it's not any kind of Supreme Judgment of Me, but I have to confess that the little bits of encouragement are deeply, deeply appreciated.

(Until I realized, of course, that her phrase could be read as an imperative - "Do us proud, girl, if you embarrass us we'll disown you altogether!") Sigh...
Posted by Pilgrim/Heretic at 6:37 PM No comments:

So we're getting some Messy Weather in the region, enough to close campus for the day. (Not sure about tomorrow, but keep your fingers crossed.) Most places would send out an announcement of the closure and leave it at that. But our provost, who is a prince among men, sent out an email following the closure notice that read in part "Faculty and staff: go home.
Enjoy a warm fire, a good book and a pleasing beverage tonight."

I am nothing if not an obedient employee, so here I am with a glass of wine, some nice cheese, a fire crackling in the fireplace and a fun novel. Boss's orders!
Posted by Pilgrim/Heretic at 4:51 PM No comments:

Spending your whole Saturday planning to do a big task, and budgeting about three hours for that task, and having to kind of work yourself up to it because it will need a lot of concentration and you're not all that excited about it...

and then opening the file and realizing that you did it a week ago.

(Should I be worried that I didn't remember this? I don't think so... it's one in a line of several tasks of its kind; I just forgot how far along I'd gotten.)

And now the LWI's playing Duran Duran for our work music. It's going to be a good day.
Posted by Pilgrim/Heretic at 4:54 PM No comments: