Just to give you the full effect, this is Ainsa, the setting of the meal pictured below. (Can you tell I'm nostalgic for this trip already??) 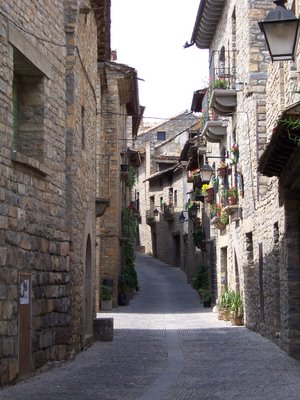 Posted by Pilgrim/Heretic at 2:36 PM No comments:

The northern and eastern regions of Spain are well-known for their cuisine, and we took every opportunity to taste the local specialties. We didn't eat a bad (or even a less-than-great) meal the entire trip, but two meals stood out among the general happy feasting. The first was when we found ourselves on a Sunday in a town a bit smaller than we'd expected, where nearly everything was closed. We found one small store where we could buy ingredients for dinner that evening, but the bakery next door seemed to be closed. When we asked the store owner if there was anyplace we could buy bread, she stepped out into the street and called to a man strolling a half block away: "Pacoooooo, come open the bakery!" Paco responded graciously and brought us an enormous loaf of fresh-baked bread. Emboldened by our success, we asked if there was anyplace nearby open for lunch, and store-lady recommended a place just down the hill, past the school on the left - usually it's closed on weekends, but this was a festival weekend, so fortunately for us it was open. Oh, so fortunately! I had fresh asparagus and venison in a rich grape sauce; awesome sister-in-law had grilled lubina (a sweet white fish, not sure what it's called in English), and the Left-Wing Intellectual enjoyed serrano ham with pimientos del padron and a thick steak. Two courses each, with wine and coffee and dessert (oh, that dessert warrants a whole separate post), for which the total bill was about $25 each. (We went back to thank the store-lady afterwards.)

Awesome SIL took a picture of that lunch, so I don't have access to it yet, but below you may behold Superlative Meal #2, enjoyed in the little medieval town of Ainsa. Notice the stone walls: we're in the wine-cellar of the restaurant, cool and quiet, with plates of duck, bull-tail stew, and more lubina. (Faces blurred to protect the crucial pseudonymity of the LWI on the left and ASIL on the right. The food will have to fend for itself.) 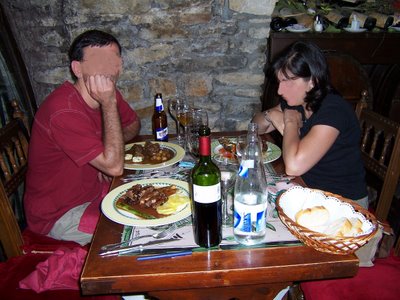 Posted by Pilgrim/Heretic at 2:07 PM No comments:

Just a taste of treats to come: here's one of the towns we stayed in last week. The apartment itself was in an ancient stone house on the main plaza, restored so that the interior was perfect and modern and comfortable, but the main structure is centuries old. Most of the inhabitants don't have cars - why bother? - and we were at least fifty miles from any town with more than a hundred people, so there was absolute tranquility... no sound but the local folks chatting with each other in the street, and the birds and crickets, and the river passing through the valley below. 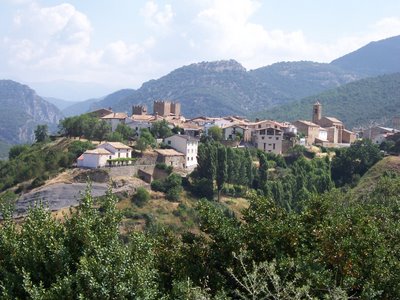 Posted by Pilgrim/Heretic at 11:52 AM No comments:

Since we’re back in the city where the Left-Wing Intellectual was born and raised, naturally when we return there are lots and lots of friends to see and relatives to visit. Spaniards, as many other cultures, like to express their affection through and over food, so it’s common for us to meet friends out for dinner or to be invited to people’s houses for a meal. Naturally this is a delightful experience (especially since I have a particular fondness for Spanish cuisine), but it can be dangerous when too many of these outings cluster too close together.

Last weekend was one of those clusters. It began on Friday, when we met Guy Who Knows Everybody for lunch at his favorite Asturian restaurant. (He really is the guy who knows everybody; every time we go out with him, we can’t get half a block down the street anywhere in the city without people stopping to greet him.) The Asturian restaurant has ohmygod the most wonderful food, but in quantities that would have gotten Napoleon’s armies all the way to Moscow and back. We started with a fabada – a cauldron full of beans in a rich thick sauce seasoned with baseball-sized chunks of chorizo and morcilla sausage, eaten with warm crusty bread and fizzy Asturian cider. A plateful of this is more than I generally eat for a meal, but it’s only the first course. Next comes the merluza, a table-width platter of the most tender, delicate white fish, over a layer of tasty fried potatoes. After that we gave up any hope of moving for the next few days and went ahead and had an almond-cake dessert with liqueurs. After slouching back in our chairs and groaning for half an hour or so, we proceeded home where we collapsed on the couch and groaned for the rest of the day.

Saturday, we were invited to the house of some family friends for a barbecue. Mmmm! Nothing like a big plate of sausage and steak after a long day of sitting around recovering from sausage and beans! (Those of my readers who attended our wedding will probably have vivid memories of how Spaniards serve steak. Beef actually isn’t that common here - pork and lamb are more frequently found - but when they do beef they do it big. Nothing says love like a steak the size of my laptop!) Sunday we celebrated my father-in-law’s 80th birthday, with what else but a giant meal at a restaurant with a lovely outdoor terrace. What? You’ve only eaten two servings of ham? Here, you must have some more, it’s the best in town. (and how can you say no to a man celebrating his eightieth birthday?)

It doesn't help that left to my own devices I tend to be a vegetarian; did you notice that not a single vegetable appears in this narrative? (no, fried potatoes don't really count as a vegetable.) I love these people dearly, but I'm afraid they're going to kill me. ...In the meantime, pass the potatoes?
Posted by Pilgrim/Heretic at 12:04 PM No comments:

Highlights of the past week (besides being able to connect to the internets in the national library!):

• a morning at the Madrid book fair, one of the biggest in the world. The setting is the lovely green Retiro park, where on the paths among the trees you find several hundred stands with every kind of book you can imagine (all at a 10% discount during the fair, of course), lots of author presentations and signings, and thousands upon thousands of happy Spaniards browsing through the possibilities. (I'm always impressed by how much Spaniards like to read; the book fair is one of the year's biggest attractions, and it's rare to see a commuter on the metro without a book in her hands.)

• an unexpected glimpse of Princess Elena (the oldest daughter of the Spanish royal family) at the book fair. She was dressed casually, and most people were focused on the books rather than each other, so hardly anyone recognized her (either that, or Spaniards are remarkably blase about their royal family). She was only about five feet away, and I wanted so badly to say hello just so I could say that I had, but I chickened out.

• a day in Toledo, with a deliciously slow and attentive stroll through the cathedral (which I've seen a dozen times, but it's so big and complex that every time there's something new to discover)

• several excellent outings with friends, over olives and cheese and little garlicky fishes and wine in cozy bars with worn tile floors and chunky oak tables. There are several chain restaurants here (and every day another Starbucks), but fortunately the vast majority of places are still little family-owned bars, each with its own character, that look like they haven't changed in the last two centuries.

• a morning spent waiting in line for shoes. Not the sort of thing that would usually be a highlight, but it was such an absurd situation that I enjoyed it immensely. There's an espadrille shop in downtown Madrid that for some reason attracts huge mobs of people; my sister-in-law had purchased some for her mother, but needed to exchange them for a different size, so we offered to go on a weekday morning since the place is too crowded on weekends. So imagine, a beautiful Thursday morning, we head to the neighborhood just south of the Plaza Mayor, and it's easy to find the shop because there are people standing in line outside the door. For espadrilles! We claimed a spot, settled in, struck up conversations with the other shoppers, developed a system of keeping people's places in line so they could wander off and window-shop down the street, and overheard the surprised comments of passers-by when they realized that we were all waiting for cheap shoes. Usually people start to get antsy about standing in line for so long, but I think everyone was a little embarrassed about waiting in line for espadrilles, so we all just laughed and enjoyed the morning and eventually wandered off with armloads of shoeboxes. (I didn't get any for myself, but we did get a teeny tiny pair of red-and-white Basque sandals as a gift for a friend's new baby.)

Posted by Pilgrim/Heretic at 5:30 AM No comments: